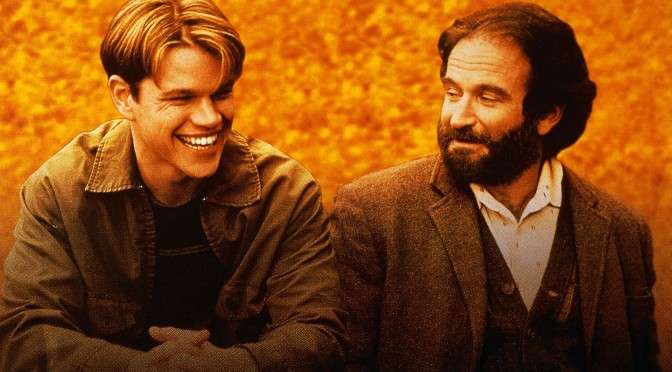 I think many of us have seen the famous movie “Good Will Hunting”. The story is about a young man (Will – Matt Damon), who is a math genius, very intelligent, yet he is incapable of certain social functions. The reason for that is that he was physically abused as a child by his foster father, which left him with a lot of emotional pain. As a result he carried a lot of guilt, shame and the blame for what he has become. A turning point in the story is when his psychologist

(Sean – Robin Williams) makes Will realize and accept that it’s not his fault that he was abused and the way his life and personality turned out. Sean repeats it several times that “it’s not your fault, it’s not your fault” until Will makes the emotional connection to that logical knowledge he already had about his life. He finally breaks down in tears as he releases himself from that emotional bondage he’s been in his whole life.

The whole scene is beautiful, and touching. I really enjoyed the movie, I think it was great. It really shows how many of us for many different reasons can be in similar emotional bondages and how our inner soul, our psyche is longing for freedom from those, and how important it is that we reach such a point in our lives. I would like to go a little further though, to what the movie doesn’t talk about. This doesn’t take away from the value of the movie, but just let’s investigate a little more, I say.

It’s important that we take this further and don’t just stop where the movie stopped. “Not your fault” will release you, but it leaves the door open for other possible psychological attacks on your life if you’re not carefully protecting yourself. Not my fault – great! But, whose fault is it then? From that place of relief you can go straight to blaming “that jerk so and so who made me that way” if you’re not careful. Instead of self-blame, now you’re back in the same old game with a different bag of problems: bitterness, hate and holding grudges against another person. THE BLAME DID NOT GET NEUTRALIZED, ONLY PASSED AROUND.

This is where it’s important to understand what Jesus actually accomplished on the cross. The Bible says that God condemned sin in Jesus’ body by nailing it to the cross. Jesus became sin for us, so we could become the righteousness of God. Sin got crucified that day and once and for all eliminated. There is an end to the vicious cycle of “hurt and be hurt”. The Bible proclaims that “death is swallowed up in victory”. The blame doesn’t have to be passed around anymore, Jesus swallowed it up and destroyed it altogether. The blame of all sin of all mankind was put into one body and got punished and killed that day when Jesus went up to Golgotha. Isaiah prophesied a long time ago that Jesus would save our spirits, our souls (psyche) and heal our bodies. He said “Surely He has borne our grieves and carried our sorrows”. Our psyche was saved as well, Jesus carried our psychological burdens on to the cross too. Most people know He died for our sins, but it’s not as widely known that He brought redemption to our minds and emotions too.

When you accept Jesus into your life, His Spirit literally becomes one with yours. That is what we call being “born again”. Jesus starts living in you and if you allow it, His nature and character can start to show on the outside. When you come to the realization and understanding of this new state of yours, God’s grace can start making the unthinkable possible in your life. The Apostle Paul says that we are going to grow up into Jesus in all things, just like He was on Earth. The full scope of your salvation is going to manifest clearly and you will be able to handle life’s blows exactly as Jesus did. Stop for a moment now and remember how emotionally sound Jesus was. He forgave those and prayed for those that were killing Him! When Peter chopped off the ear of one of the people who came to arrest Him, He healed the man’s ear. I mean, who does that? He didn’t say: I can’t believe you guys, I healed all your sick, I preached the good news, fed the poor, and this is what you’re doing to me? I’m so hurt! He was hurting FOR people, but never BY them. Big difference!

How did He do that? He was safe in His identity as the Son of God. When you get saved, you also become a son of God. There are many references in the Bible about that. When you are solid and safe in your own identity as a son of God, hurt will not be able to touch you. It will be neutralized and eliminated in the nature of Jesus inside of you. Psychological hurt is a result of sin, both on the giving and receiving end. God’s work of mankind’s salvation cleanses you from the effects of sin as well. You’re free. Blame got already crucified.

Only if you embrace these truths, will you be able to do with a pure heart what Jesus commanded mankind. “Love your enemies, bless those that curse you, do good to them that hate you, pray for those that abuse you” sounds totally crazy to the natural mind. And we were not commanded to do this with gritted teeth like Christian robots, but honestly and purely out of love. It is impossible to carry any emotional hurt and do these above mentioned commandments in the same time. If you still do, you’re just religious, and the stench of that will show sooner or later. God’s Spirit inside of you can soak up that hurt and turn it into nothing. This and this only will stop the vicious cycle of placing the blame. This is the ultimate victory of psychology. This is the ultimate redemption of your psyche.